Radiation Environment and Medicine Vol.6, No.2

Radiation Environment and Medicine
Vol.6, No.2 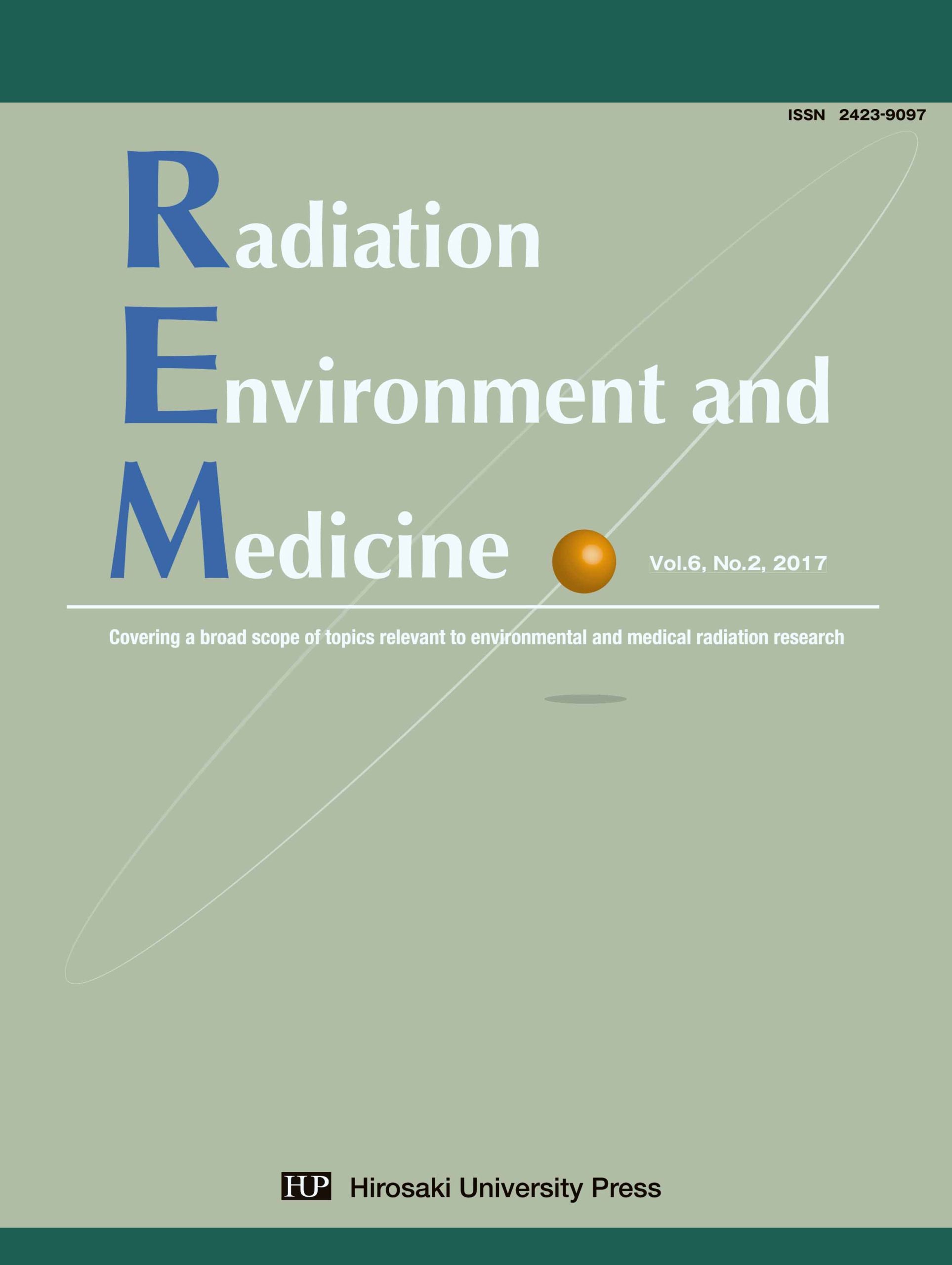 The Environmental Protection Agency (EPA) Ireland monitors both natural and man-made radioactivity in the Irish environment. This radiation monitoring programme has evolved over time as a result of legislative requirements, the inventory of anthropogenic radioactivity in the Irish environment and as a response to nuclear accidents. The three most significant nuclear accidents from an Irish perspective are the Windscale fire in October 1957, the Chernobyl accident in May 1986 and the Fukushima accident in March 2011. As a result of these accidents, the radiation monitoring capabilities and expertise in Ireland has increased and there have been significant developments in the areas of emergency preparedness and response to nuclear accidents. In order to respond ef fectively to nuclear accidents it is important that Ireland maintains an integrated comprehensive monitoring network, engages all relevant stakeholders, communicate effectively and to continue to develop resources taking into account the lessons learned from past accidents and international best practice.

Industrial exposure to neutron irradiation is tightly controlled such that the carcinogenic risk toindividuals and populations is very low. Patients undergoing high-energy ( >10 MeV) radiation therapy, however, represent a population group for whom whole-body neutron exposure cannot be controlled. Such patients are thus at risk for second radiation-induced malignancies. This is true in particular for cured pediatric cancer patients whose life expectancy exceeds the latency period for radiation-induced tumor formation. The Neutron-Induced Carcinogenic Effects (NICE) research program (depdocs.com/jkildea/NICE.html) is designed to study the biophysics underlying the energy-dependent variation in the carcinogenic potential of neutrons such that the second cancer risk to radiation therapy patients may be better understood and accounted for. The program calls for macroscopic and microscopic Monte Carlo modelling of real-world polyenergetic and nonisotropic neutron sources under experimental irradiation conditions coupled with radiobiological experiments and DNA-damage assays. The five-year research program is a collaboration between McGill University, Canadian Nuclear Laboratories, the Canadian Nuclear Safety Commission and Detec Inc.

Dose response and dose-rate ef fects in the low-dose-rate (LDR) range have not been evaluated with respect to chromosome aberrations. The incidences of chromosome aberrations were analyzed in splenic lymphocytes from mice that were continuously exposed to γ– ray at the LDR for evaluation of the dose response and dose-rate effects. The frequency of dicentric chromosomes and translocations detected by fluorescence in situ hybridization (FISH) increased almost linearly up to 8,000 mGy at 0.91 mGy/h and to 700 mGy at 0.045 mGy/h. In no-exposed mice, translocations increased in a linear quadratic manner with age. After adjustment for age, value of linear coefficient of the dose-response relationship for the frequency of translocations at each dose rate decreased as the dose rate was reduced, suggesting a dose- rate effects in the LDR range. These results will be useful for establishment of a biodosimetry method for individuals who are occupationally or accidentally exposed to chronic LDR radiation. On the basis on the present findings, retrospective dosimetry was performed for two populations of subjects who had been exposed to radioactive fallout from nuclear explosion tests. The merit and drawbacks of using dicentric chromosomes or translocations as indices in chronic exposure at the LDR are discussed.

Reviewing Domestic Literature on Radiation Emergency Medicine: Role of Nurses as Viewed in the Literature

This study was to investigate previous researches on nurses’ roles in radiation emergency medicine (REM) in Japan and to clarify how much is known on this subject. These 178 publications that were the target of the analysis were classified by the type of literature, their publication date, and the period in which they were published and then the number of publications was confirmed. Moreover, the subjects were classified after the content that was described. Besides the past nursing publications, nursing professionals have been included in training and practice for REM, have been given education, and have been included in the staff members who are on the REM team. However, there have not been any details or records of the roles of nursing professionals. It seems possible to clearly specify the roles of nurses in REM by accumulating more studies going forward. Moreover, once the nursing roles have been clarified and shouldered, clarifying the type of human resources that are required and the type of training to be conducted and education to be provided is essential. By reviewing and changing the existing system based on cases of past accidents and disasters, the roles of nurses that are required by their medical institutions will become clear.

Concern and anxiety over medical radiation exposure have increased in Japan following the Tokyo Electric Power Company nuclear plant accident in Fukushima triggered by the Great East Japan Earthquake in March 2011. In June 2015, based on domestic fact-finding surveys by various academic societies and organizations connected with the Japan Network for Research and Information on Medical Exposure, a diagnosis reference level (DRL) “Diagnostic Reference Levels Based on Latest Surveys in Japan — Japan DRLs 2015̶” was made public for the first time in Japan. Although X-ray photography is routinely used in the dental field for diagnosis and treatment, inspection and review of devices are insufficient because dentists’ awareness of radiation protection is low. This low awareness may be because the effective dose per unit exposure in dental devices is very small compared with that in medical devices, thus dentists do not perceive a high risk of radiation exposure. However, it is important for dentists to understand the contents of DRLs and pay careful attention to radiation protection from a public health standpoint. The objective of this paper is to overview the radiation protection in the dental field.

The absorbed dose rate in air was measured using the car-borne survey technique on Phu Quoc Island, Vietnam in December 2015. The average absorbed dose rate in air measured on asphalt pavement was 61±15 nGy h-1 and higher dose rates in air were observed along asphalt roads, whereas the average value measured on unpaved roads was 29±6 nGy h-1, meaning the former average dose rate was 2.0 times higher. The average dose rate for the entire island was 44± 20 nGy h-1. The estimated annual external effective dose was 0.29 mSv y-1, which is 60% of the worldwide average.

The Medical Treatment of Radiation Exposure and Contamination in Radiation Accidents

Various types of radiation accidents can occur, including rare events such as nuclear disasters, and mistakes in handling radiation sources. Although such accidents are less common in comparison to other disasters, a rapid and long-term medical response is necessary, especially in cases in which individuals are seriously injured by radiation exposure or contamination. In order to facilitate prompt medical treatment at the time of an emergency, it is necessary to understand the radiation dose to which the patient was exposed, to determine whether contamination occurred, and to select an appropriate treatment. In addition, we also need to have some basic knowledge of radiation to understand the associated dangers. In this article, we summarize the historical radiation accidents and report the details of treatment for patients who were exposed to radiation.

Numerical simulation assessment via an atmospheric transport and dispersion model (ATDM) has proven extremely useful for ef ficiently estimating the impacts resulting from nuclear incidents. In August 2015, Hirosaki University was designated as Japan’s national center for radiation emergency medicine and it is expected that the University will continue to play an integral role in the estimation of catastrophic-event influences per the use of ATDM simulations. Such simulations will help to conduct proper diagnoses and treatments for the general public in response to such emergency situations. In support of such endeavors, Hirosaki University has recently focused upon an ATDM simulation system developed by a project of the Interdisciplinary Study on Environmental Transfer of Radionuclides from the Fukushima Daiichi Nuclear Power Plant Accident. This simulation system is able to estimate radionuclide influences via the use of a common notebook without the need for extensive calculations. In this paper, the current installation and deployment status of the ATDM system at Hirosaki University are described.

In 2015, Hirosaki University was designated as an Advanced Radiation Emergency Medicine Center and a Nuclear Disaster Medical Care/General Support Center; it thus of fers critical medical treatment in radiation emergencies. The extent of radiation damage to human organs and tissues depends on radiation exposure levels. The Monte Carlo particle transport simulation code is used in radiation emergencies to estimate the radiation exposure levels. At Hirosaki University, the latest version of the Particle and Heavy Ion Transport Code System (PHITS), developed under collaboration between the Japan Atomic Energy Agency, the Research Organization for Information Science and Technology, and the High Energy Accelerator Research Organization is employed as the Monte Carlo particle transport simulation code for use in radiation emergency situations. The PHITS can estimate absorbed energy using computational materials. In this paper, practical use of the PHITS in emergency situations is demonstrated. At Hirosaki University, the PHITS will continue to be utilized for the dose calculation during emergency situations while it is updated to its latest version.