Radiation Environment and Medicine Vol.7, No.1

Radiation Environment and Medicine
Vol.7, No.1 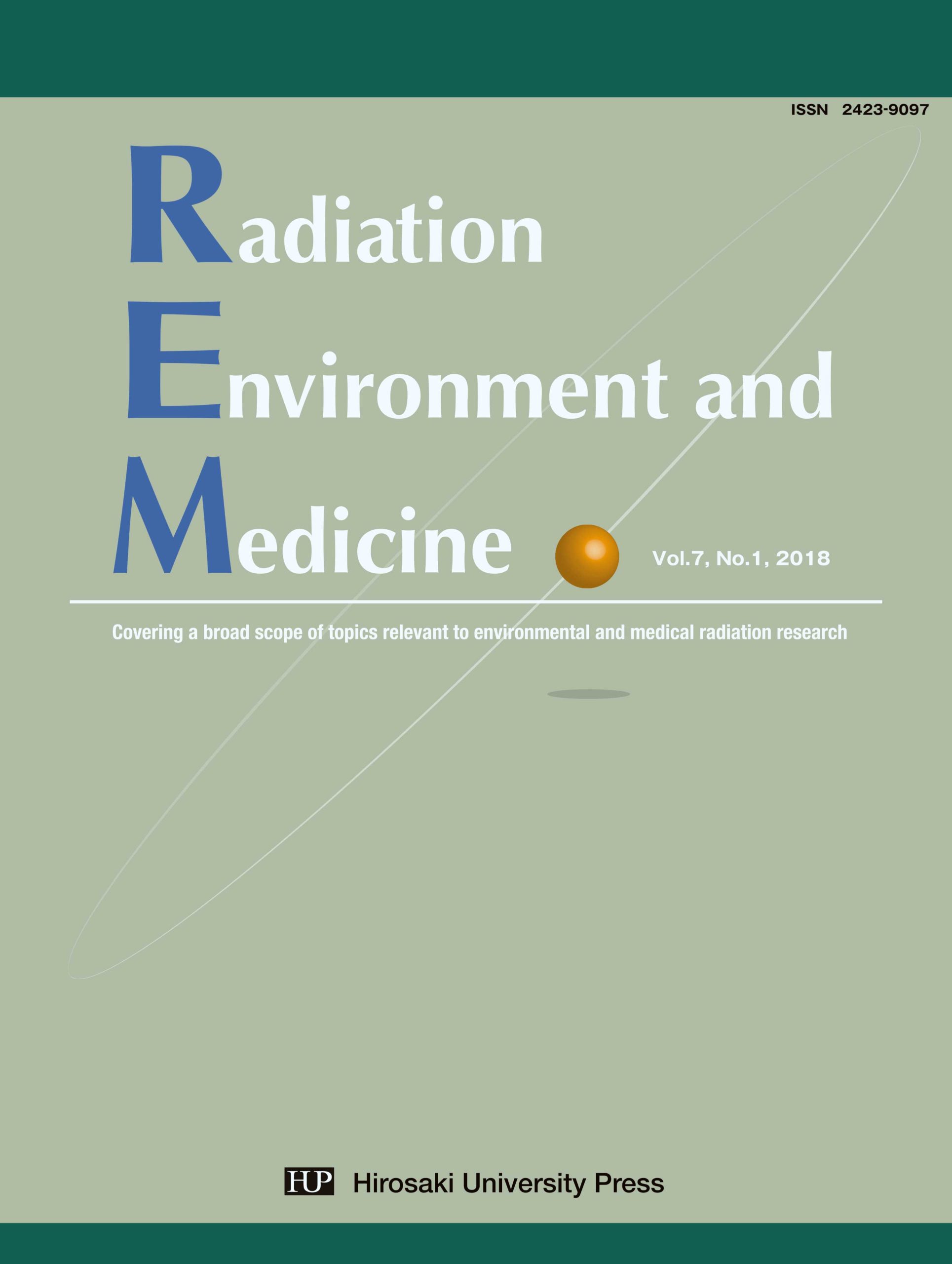 The principles and clinical applications of the different magnetic resonance angiography (MRA) techniques that are available in clinical settings are described in this paper.
Time-of-flight (TOF) MRA is the most common MRA method, per formed without the intravenous injection of any contrast material. The high diagnostic accuracy of brain three-dimensional TOF MRA in the detection of both steno-occlusive lesions and aneurysms is well-known. Therefore, MRA is usually performed first in suspected cases of these vascular lesions, with subsequent computed tomography angiography (CTA) or conventional angiography for further examination.
Phase-contrast MRA is another magnetic resonance technique that allows for the evaluation of flow directions and flow velocities, which is a specific advantage of MRA as compared with CTA.
In peripheral arteries, fresh blood imaging (FBI) or contrast-enhanced MRA is preferable because two-dimensional TOF MRA requires a long acquisition time. FBI is a novel and noninvasive MRA technique. However, this technique has been introduced relatively recently and is not available in many current magnetic resonance systems.

In an effort to better characterize natural radioactivity levels, including total uranium in public water supply systems, drinking water quality data were reviewed for 24 metropolitan areas and cities which cover more than 64% of the total Canadian population. Levels of radioactivity were generally found to be low compared to national and international guideline standards for drinking water quality. The population-weighted average levels are 0.0021 Bq/L for gross alpha, 0.042 Bq/L for gross beta, 0.0017 Bq/L for 226Ra, 0.0068 Bq/L for 210Pb, and 0.23 μg/L (0.0058 Bq/L) for total uranium. The average effective dose resulting from drinking water intake at these levels would be 4.2 μSv per year.

Development of Radon and Thoron Exposure Systems at Hirosaki University

Radon (222Rn) and thoron (220Rn) exposure systems were designed and developed for calibrating radioactive gas monitors, based on the quality assurance (QA) and quality control (QC) standards of the monitors at Hirosaki University, Japan. To monitor the concentration levels of radioactive gases, gas monitors were installed inside an exposure chamber together with a temperature humidity meter for recording inside and outside conditions during performance tests. In this study, radioactive gases generated from natural rock were used as the 222Rn source and commercial lantern mantles enriched with thorium (232Th) were used as the 220Rn source. The concentration levels were kept within a range between 0.2 and 10 kBq m-3 for the 222Rn exposure system and between 3.5 and 29 kBq m-3 for the 220Rn exposure system. The results obtained demonstrated that the concentration levels depended on such factors as the type of sources, flow rates of the radioactive gases generated into the chamber, gases emanating from the sources, and humidity in the gas generation system, and they are described in the paper. However, performance tests of these exposure systems were carried out and their results showed that 222Rn and 220Rn concentrations in the exposure chamber could be easily controlled through manually setting the flow rate and relative humidity and the distribution of gases was fairly homogenous.

The present study aimed at providing gamma radiation levels from natural radionuclides for Fukushima City (Fukushima Prefecture, Japan) and clarifying the contribution of the artificial radionuclides derived from the 2011 Fukushima Dai-ichi Nuclear Power Plant accident to external radiation exposure. Air-kerma rates from them were measured with a 3 in×3 in NaI(Tl) scintillation spectrometer outdoors and indoors at junior high school sites in the summer of 2014 after decontamination activities had been completed. The results showed that the outdoor and indoor air-kerma rates from the natural radionuclides were about 0.04 μGy h-1 and 0.03 μGy h-1, respectively. Those from the artificial radionuclides were about 0.03 μGy h-1 for outdoors and 0.01 μGy h-1 for indoors. At almost all sites, the natural gamma radiation dominated external gamma radiation exposure on the measurement dates.

The oil industry currently produces huge amounts of drilling mud, and the re-use of these byproducts are studied worldwide. In this study, the reusability of deposited drilling mud as a building material was investigated from a radiological point of view.
Terrestrial radionuclide concentrations were determined by gamma spectrometry, while the radon exhalations were evaluated by the accumulation method. The caused radiation doses were estimated by dif ferent calculation processes in cases in which the by-product was used as a building material.
The radionuclide contents were 31 (18-40) Bq/kg of 226Ra, 35 (33-39) Bq/kg of 232Th and 502 (356-673) Bq/kg of 40K. The radon exhalation was 12 (6-17) mBq/kgh, and the emanation coefficient of the samples was 6 (5-12) %.
According to the applied dose calculation models (indices), all of the results are below the limits; therefore, the use of drilling mud in the building industry exhibits no increased radiological risk. When comparing the applied indices with each other, it must be taken into consideration that the units indicate different dose values. In addition, their calculation is not consistent: excess dose rate vs. total dose Gy vs. Sv. etc.

The purpose of this case-study is to consider the effect of radiation risk communication educational programs. This program was developed to conduct research in an interactive format by incorporating exercises and group work. The program used a three-part series, with one session of 110 minutes per month. The subject was local government officials (n = 9), and an anonymous questionnaire was conducted before and after the lesson, and focused on participants’ perceptions of radiation and the tools utilized in information gathering. As a result, after implementing this program for the target audience, their image of radiation changed in four categories. This is thought to indicate that participants started with a somewhat negative evaluation of radiation, which then might have changed to a more neutral evaluation following the program. In terms of the tools that can be used to collect information about radiation, there was increased such as the Internet, SNS, TV, radio, and newspapers, it was inferred that they might have helped develop an increased awareness of information related to radiation.
Based on the data, the practices used in this educational program might be an effective means of organizing education in the field of radiation risk communication.

Intensity-modulated radiotherapy (IMRT) involves dose-intensity optimization for inverse planning and creates an ideal dose distribution. Optimization calculation is necessary to avoid iterative calculation, which is time consuming. This study aimed to prove the theoretical possibility of planning IMRT using filtered back projection (FBP).
In a previous study, we created an FBP program using Excel. The program was used for image reconstruction to obtain the desired virtual cancer shape, and back projection data were obtained during reconstruction. IMRT dose distribution was achieved by transplanting these back projection data as beam intensity to the treatment planning system. In the previous study, the dose distribution was not evaluated with a quantitative index. Therefore, to evaluate the dose distribution of this method through a quantitative index, the projection angles during image reconstruction were planned in 18 and 36 directions, and the dose-volume histogram (DVH), homogeneity index, and conformity index were compared. The results of the DVH graph of projection in 18 and 36 directions confirmed that the larger the projection angle, the higher the reproducibility of the original image. Creating a dose distribution with high dose concentration was possible.
At present, IMRT is planned using an optimization algorithm. However, results of the current study show that the beam intensities of IMRT can also be determined by processing only the image reconstruction using FBP in terms of dose distribution evaluation through quantitative indicators.

The atmospheric concentration and deposition flux of cosmogenic 7Be were observed at Toki city, Gifu Prefecture, located in the central region of Japan, from September 2013 to March 2017, to understand the regional characteristics of the atmospheric environment. Atmospheric 7Be concentration ranged from 1.92 to 6.97 mBq m-3 and high concentrations were observed in spring and fall. 7Be deposition ranged from 35.2 to 281.6 Bq m-2 and it had a single peak in summer depending on monthly precipitation. These results are comparable to the previously reported values. Total deposition velocity of 7Be ranged from 0.25 to 4.92 cm sec-1 with a mean value of 1.48 ± 0.88 cm sec-1, and showed a seasonal variation pattern with a single large peak in summer which is similar to deposition pattern. These results suggest that precipitation is an important control factor of total deposition velocity.

This report introduces part of “Training Course for Fostering the Leaders in Radiation Emergency Medicine in Aomori Prefecture” which was held at Mutsu City in Aomori Prefecture in 2016. In collaboration with Aomori Prefecture, Hirosaki University promoted the “Education Program for Professionals in Radiation Emergency Medicine” from 2010 to 2014. The aim of the program was to develop and support human resources with advanced expertise, abilities, and skills related to radiation emergency medicine in the area. In the training course described here, the trainees who had completed the “Education Program for Professionals in Radiation Emergency Medicine” took part as instructors. Seventeen people mainly from the Shimokita District local government of Aomori Prefecture participated in the training. Before the training, participants underwent preliminary learning through an e-learning system focusing on topics such as radiation, biological effects of radiation, radiation protection, and effects of radiation on the human body. Then, lectures and practical training were conducted for three days. Although it was a valuable opportunity for trainees who had finished the “Education Program for Professionals in Radiation Emergency Medicine” to share their knowledge and skills to the participants, it seems necessary to have a multifaceted continuous training system.