Radiation Environment and Medicine Vol.6, No.1

Radiation Environment and Medicine
Vol.6, No.1 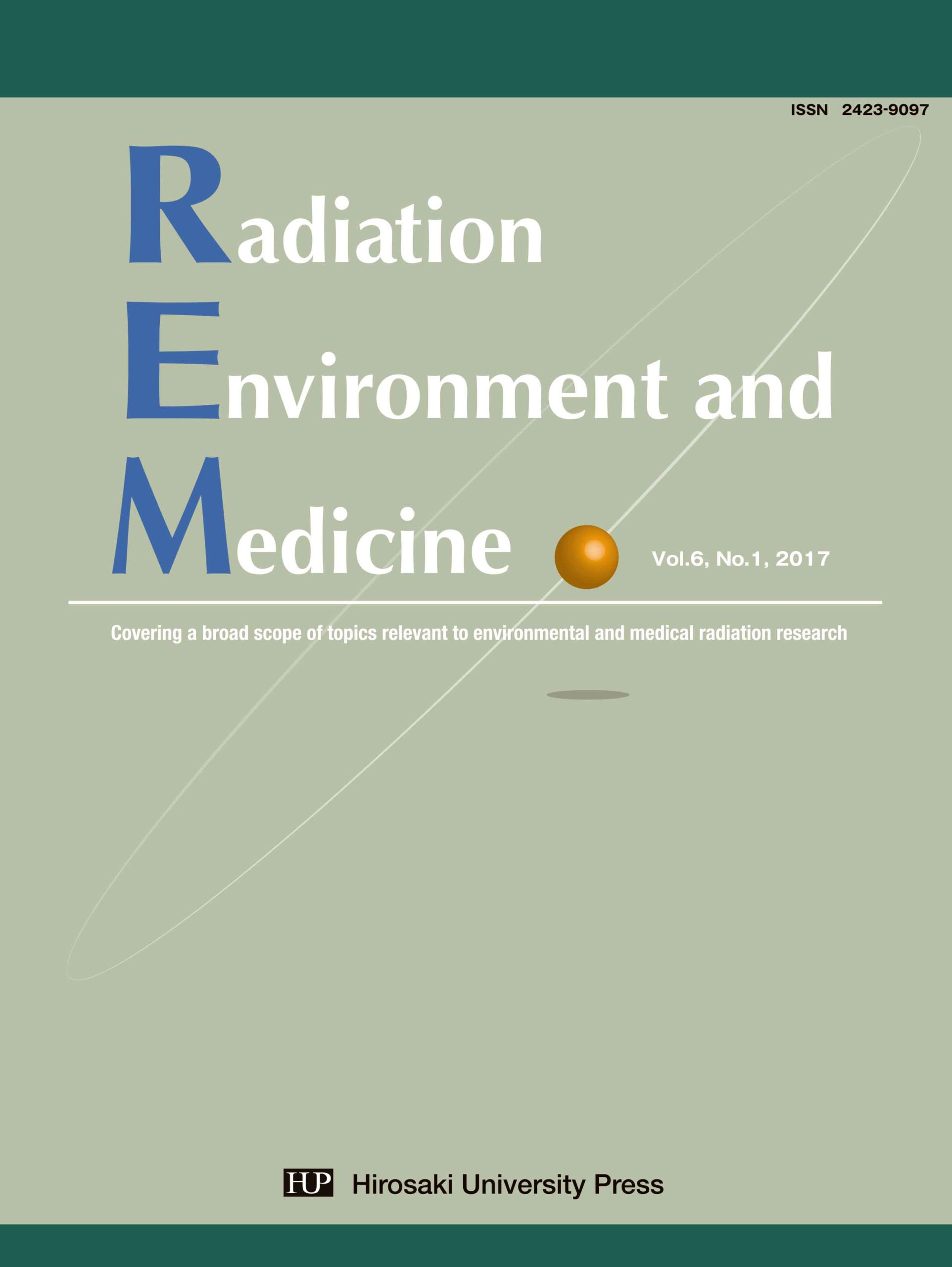 Electron spin resonance (ESR) spectroscopy in combination with irradiated solid granulated sugars was first examined for use as a radiation dosimeter. The first derivative ESR spectrum obtained from X-irradiated sugars was doubly integrated to derive the actual signal intensity. The amount of free radicals produced in X-irradiated sugars was estimated by comparing with the intensities of the 1.1-diphenyl-2-picrylhydrazyl (DPPH) standard having one spin (radical) in its molecular structure. The linear relationship obtained between the amount of free radicals and the irradiation dose in the range of 33 – 2000 mGy confirmed the applicability of ESR spectroscopy as a dosimeter. Therefore, this method was further applied to measure radiation doses accumulated in the teeth of field mice living around the Fukushima Nuclear Power Plant to assess the impact of the Fukushima nuclear accident that occurred on March 11, 2011. Nineteen field mice were collected between November 15 and 17, 2013. ESR signals of the teeth (40 mg for each) of these mice were compared with those in Hokkaido (non-irradiated controls). However, because of large background ESR signals in both samples, no statistically significant difference was observed between the radiation levels in the teeth of mice collected from Fukushima and those from Hokkaido.

This study aimed to prove the theoretical possibility of planning intensity modulated radiation therapy (IMRT) using filtered back projection (FBP). To this end, we created an image reconstruction algorithm on a personal computer using FBP and then reconstructed a tumour planning target volume (PTV) image. From this, tumours FBP data was acquired. This projection was then input into a radiotherapy planning system (RTPS) as beam intensities of IMRT plan. We then acquired the dose distribution within the tumours image from this system. We acquired the dose distribution in the film by irradiating the area according to the treatment plan and then compared the two dose distributions. The dose distribution in tumours image from the RTPS was almost identical to that in the PTV showed by one CT image. IMRT is currently planned using an optimization algorithm, but the current findings show that beam intensities of IMRT can also theoretically be determined by only the processing of image reconstruction by using FBP without dose calculation by using iterative methods.

Analytical Derivation of the Overall Uncertainty in Biokinetic and Dosimetric Models of α-, β-, αγ- and βγ- emitters

The objective of the present study is to assess overall uncertainty in biokinetic and dosimetric models of α-, β-, αγ- and βγ- emitters. International Standard Organization (ISO) methods on uncertainty assessment have been applied taking into account all biokinetic and dosimetric parameters intervening in the determination of the ingestion dose coefficients of radionuclides. Clear uncertainty budget and well established mathematical formulas were obtained for α-, β-, αγ-, and βγ- emitters from the updated ingestion dose coefficients. This method was applied to 238U, an αγ- emitter, and can be generalized to other radionuclides. By ranging the relative uncertainty on the Absorbed Fractions, Numbers of transformations, Radiation and Tissue weighting factors and wall parameter from 5% to their nominal values in the literature, an overall relative uncertainty ranging from 126 to 176% was brought out. Thus biokinetic and dosimetric models of radionuclides should be improved to make them more realistic, reducing the above uncertainty. Correlations between Specific Absorbed Fractions of each source and corresponding targets will be taken into account very soon within the framework of a specific study using Monte Carlo calculations.

The aim of the study is to assess natural radiation exposure to the public in the gold mining areas of Eastern Cameroon. For this purpose the sodium iodide (NaI) detector was used to determine activity concentrations of natural radionuclides in soil samples. External radiation dose to the public and radiological hazards were assessed. The average activity concentrations determined for 226Ra, 232Th, and 40K were 40.1 Bq kg-1, 29.4 Bq kg-1, and 216.9 Bq kg-1, respectively in agreement with the mean values given by the United Nations Scientific Committee on the Effects of Atomic Radiation (UNSCEAR). The mean external annual effective dose was found to be 0.34 mSv yr-1. The mean external hazard index was less than unity while the radium equivalent activity of all soil samples have shown lower values than the limit of 370 Bq kg-1 defined by the Organization for Economic Cooperation and Development (OECD). Results of this study pointed out that soils examined in the gold mining areas of Eastern Cameroon can be used for buildings construction. Some recommendations were drawn to strengthen the environmental protection in mining areas.

Mapping the Baseline of Terrestrial Gamma Radiation in China

A Survey of a High Natural Radiation Spot in Tono Area, Japan

We observed absorbed dose rate in air at a uranium ore outcrop which is known as one of the highnatural radiation spot of the Tono area in central Japan. This outcrop was mainly Toki granite and weathered soil. The absorbed dose rate in air measured on the rock and surface soil using a pocket survey meter ranged from 572 to 9684 nGy h-1, and significantly high values were observed at a small rock body and the bottom of a trench. The uranium concentration of the soil in the trench was 1220 ppm which is a significantly high value. The measured absorbed dose rates in air were reasonably high compared with the general environment.

This article is a report of our activity in the third “Radiation Emergency Medicine (REM) Education and Training Course” held in Jeju, South Korea, from May 24-27, 2016. This training program was a large-scale on-site training in which a major institution from South Korea participated. Hirosaki University collaborated with the Korea Institute of Radiological and Medicine Sciences (KIRAMS) and Cheju Halla General Hospital. The training was conducted with the aim of extracting problems mainly in the coordination/cooperation against nuclear terrorism between South Korea and Japan. Our missions focused primarily on triage, a surface contamination survey, decontamination, and the treatment of victims injured by dirty bombs in a terrorist attack. During the training, we realized the difficulty in the execution of medical activities and communication in the face of terror-related confusion. We value the experience we gained by participating in activities involved in international cooperation during an emergency. We expect that future exercises will see the participation of many organizations involved in radiation medicine.