Radiation Environment and Medicine Vol.5, No.2

Radiation Environment and Medicine
Vol.5, No.2 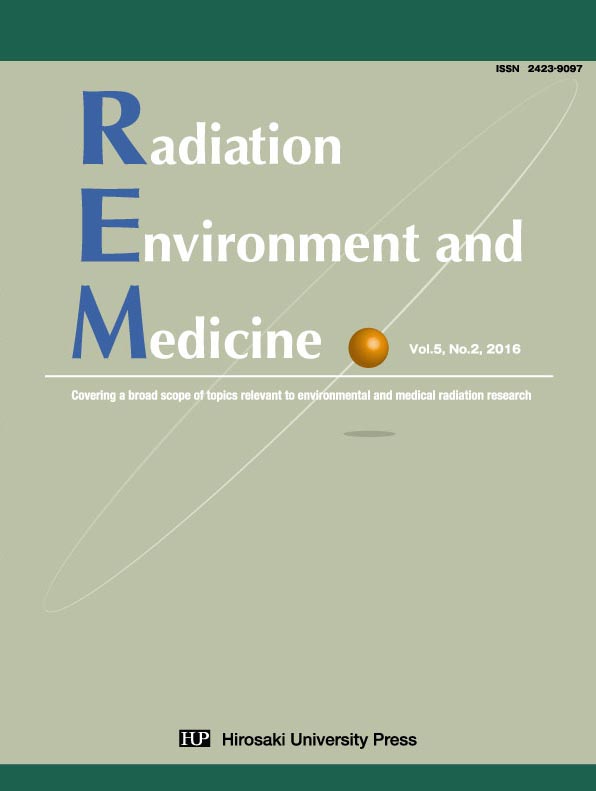 The Oma nuclear power plant is under construction near the town of Oma and Rokkasho village in Aomori Prefecture. The plant employs a full mixed oxide furnace and includes a plutonium reprocessing plant for the reuse of plutonium. To develop an appropriate medical treatment protocol in case of exposure to radiation from the plant, an understanding of the effects of plutonium on biological systems, in particular of those related to carcinogenicity, is required. Therefore, to examine the influence of plutonium on the human body, we have reviewed existing documents detailing surveys of workers exposed to plutonium radiation at the Manhattan Project in the United States of America and the Mayak facilities in Russia, as well as animal experiments conducted at the National Institute of Radiological Sciences and other facilities.
We found that there is a significant dose-dependent relationship between internal exposure of plutonium and lung, liver, and bone cancers which is influenced by gender, age, and lifestyle habits. In contrast, radiation effects of plutonium on cancers other than those of the lungs, liver, and bone are considered to be extremely low.

Tumor cells deficient in p53 function enter G2 arrest, but not G1 arrest, following irradiation. Previous studies generally used flow-cytometric analysis to monitor these kinetics; however, this method is incapable of analyzing temporal changes in the G2/M fraction in the same cell population. Furthermore, this approach requires isolation of synchronized cell populations at specific phases to investigate the effect of differences in cell-cycle phase at the time of irradiation. In this study, taking advantage of the fluorescent ubiquitination-based cell cycle indicator (Fucci), we characterized the detailed kinetics of radiation-induced cell-cycle alteration, especially those associated with G2 arrest, in HeLa cells. Specifically, we determined the dependence of cell-cycle kinetics on radiation dose and cell-cycle phase at irradiation in an asynchronous population of live cells. Thus, we show that the Fucci system is useful for analyzing radiation-induced cell cycle kinetics in tumor cells lacking p53 function.

The generation and migration of 222Rn in BaSO4 precipitate samples obtained by a barium coprecipitation method were investigated using measurements of 226Ra activity concentrations, 222Rn emanation coefficients and published values of 222Rn diffusion coefficients in this study. 226Ra activities obtained using different radon-tight sealing methods were not observed to be significantly different compared with those obtained without sealing. The emanation coefficient and the diffusion coefficient in the precipitate – factors that influence the 222Rn exhalation rate —were found to be much lower than those in other materials. As a result, the evaluated exhalation rate, which was found to be 1.8 × 10-5 Bq m-2 s-1, was found to be lower than that from other materials. Thus, the sealing method is not a significant influencing factor on the 226Ra activity concentrations determined using this barium co-precipitation method. Additionally, it was found that the uncertainty of 226Ra activity was most strongly influenced by the chemical recovery of the 226Ra using the barium co-precipitation method.

A simple method for simultaneous sampling and analysis of particulate, inorganic and organic gaseous halogens, Cl, Br and I, in the atmosphere was reported. The sampling system consisted of three kinds of filters of 47 mm φ which were supported in a Norwegian Institute for Air Research (NILU) filter holder system connected in series. Fine and coarse particulate halogens were collected on separate fluoropore filters with a cascade impactor. Inorganic gaseous halogens were sampled with three cellulose filters impregnated with 1 M LiOH in a 10% glycerol water mixture. Organic gaseous halogens were absorbed in three activated charcoal paper filters. An outdoor air sample was passed at a flow rate of 10 L min-1 every two weeks. After sample collection, each filter sample was separately sealed in a polyethylene bag, and analyzed for Cl, Br and I with an instrumental neutron activation analysis (NAA) using the Kyoto University Research Reactor (KUR). Recoveries of inorganic and organic gaseous halogens in this system were greater than 80%. Atmospheric I concentrations of coarse and fine particulate, inorganic and organic gaseous were between 0.17 – 0.52, 0.46 – 1.38, 1.50 – 3.44 and 1.66 – 5.94 ng m-3, respectively. Those of Br were between 6.94 – 14.03, 1.74 – 3.92, 8.59 – 12.68 and 6.65 – 17.05 ng m-3, respectively. And those of Cl ranged between 1980 – 4600, 5.72 – 23.16, 318 – 647 and 25.0 – 115 ng m-3, respectively.

Air kerma rates by environmental γ -ray at two years after the Fukushima Nuclear Power Station accident were investigated around public facilities in Fukushima City, Koriyama City, Nihonmatsu City and Motomiya City in the Naka-dori area of Fukushima Prefecture. A CsI scintillation survey meter, which is very versatile, was used for measurement. This survey meter was calibrated by means of simultaneous measurement with an NaI(Tl) scintillation spectrometer. The minimum values of air kerma rates at each measurement site were higher than the background levels, and the medians were 0.23-0.35 μ Gy/h. Using these values and assuming a one year stay at the site, the annual effective dose was evaluated to be 1.5-2.3 mSv. The maximum value was 0.57-1.03 μ Gy/h, and the annual effective dose by environmental γ-ray was estimated to be 3.7-6.7 mSv without considering the attenuation of the radioactivity.

This paper reports results obtained from a questionnaire survey conducted to understand the awareness of radiation risk communication among municipalities adjacent to nuclear power plants. A total of 532 questionnaires were sent by post to the following organizations: 105 local government offices, 66 public health centers or departments, and 151 visiting nursing stations. All these organizations were within 30 km from nuclear power plants across Japan. We analyzed 154 completed surveys from the following respondents: 108 municipal employees, 33 home visiting nurses, and 13 public health nurses. The findings of this study suggest that local municipalities adjacent to nuclear power plants are aware of the necessity to communicate the risk of radiation; however, it has not been sufficiently practiced due to a lack of confidence in basic knowledge of the risk. It is also suggested that there is no consensus on who should take the initiative to communicate the risk. This is because there are differing interests between the nuclear power companies and the municipalities that did or did not invite nuclear plants to their locale. These findings clearly show there is a strong demand to acquire knowledge about risk communication.

In 2014, tritium was detected in the groundwater leachate at a landfill site in Kerdiffstown, County Kildare, Ireland. The objective of this work is to determine the tritium activity concentrations in the groundwater leachate at the Kerdiffstown Landfill in order to determine the leachate flow. Thirty-seven boreholes both on and off-site at Kerdiffstown landfill were sampled for groundwater leachate from September 2014 to March 2015. The leachate samples were then double distilled and analysed for tritium using a low level Liquid Scintillation Counter. Through the use of the tritium in leachate measurements made in this study, the flow of leachate from the Kerdiffstown landfill site was determined. The maximum tritium activity concentration measured at the landfill was (458± 35) Bq/l. This measurement was made at a borehole located in the north-west of the site and has a depth of 70.45 mOD (meters above Ordnance Datum). Based on the measurements made in this study it is reasonable to assume that the primary source of tritium on this site is located in the north-western zone and a general flow of leachate from west to east is observed. The results of the study also indicate that leachate flow increased during periods of heavy rainfall.

This report was described about Radiation Emergency Medicine (REM) Education and Training Course that was conducted in Jeju, South Korea for two days on September 9 and 10, 2015. This training was a large-scale on-site training in which major institutions of South Korea participated. Hirosaki University collaborated with Korea Institute of Radiological & Medical Sciences (KIRAMS), and the training was conducted with the aim of extracting problems mainly in the coordination/cooperation systems against nuclear terrorism between South Korea and Japan. Our missions took place mainly in a triage and a surface contamination survey for victims, who were injured by dirty bombs. During the training, we realized the difficulty in the execution of medical activities and communication in terror-related confusion. It was possible to experience for the actuality of activities involved in the international cooperation during an emergency. We expect participation by many organizations involved in radiation medicine in the future.