Radiation Environment and Medicine Vol.10, No.1

Radiation Environment and Medicine
Vol.10 No.1 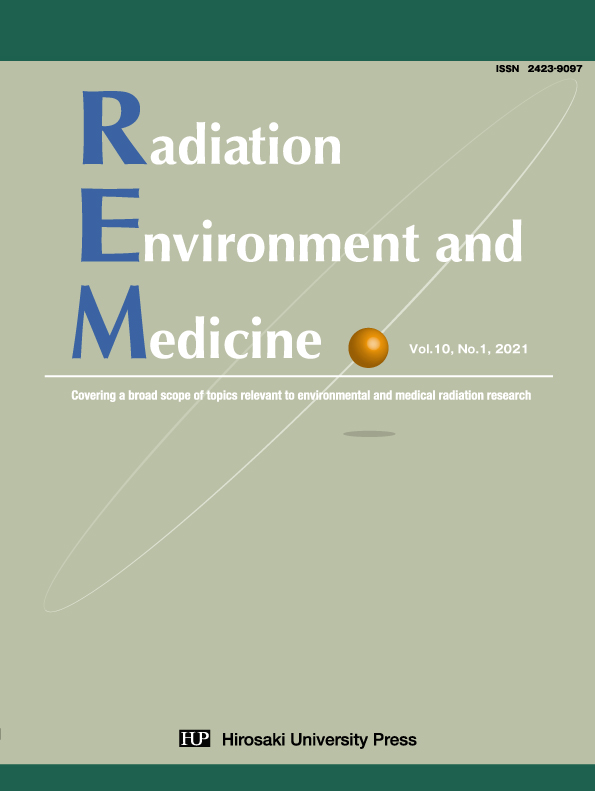 Since the discovery of X-rays in 1895, radiation has been widely used in medicine and industry, but its biological effects on health have also been a problem. A group of researchers in the United States discovered in 1948 that large doses of cysteine administered prior to radiation exposure could protect mice exposed to whole-body X-rays from radiation damage. Around the same time, a group in Belgium also reported a similar effect on cysteamine, a breakdown product of cysteine. Currently, the International Atomic Energy Agency recommends either granulocyte colonystimulating factor (G-CSF) or granulocyte macrophage colony-stimulating factor (GM-CSF) for acute radiation syndrome (ARS) due to moderate to severe exposure of 2 – 6 Gy and interleukin-3 in combination with G-CSF, GM-CSF, erythropoietin and thrombopoietin (TPO) for more severe or lethal doses ( >6 Gy). In addition, the U.S. Food and Drug Administration approved G-CSF, pegylated-CSF, and GM-CSF for hematopoietic ARS. There have been many reports on the radioprotective/mitigative agents, and several excellent reviews have been published. This review focuses on TPO and its receptor agonists, which are expected to be utilized in the future, and outlines the process from its discovery to its approval as a pharmaceutical drug, action, and future prospects.

Estimation of Annual Effective Dose in Namie Town, Fukushima Prefecture due to Inhalation of Radon and Thoron Progeny

210Pb and Major Ion Concentrations in Aerosols Collected in Qingdao, a Seaside Area of China

This study aimed at understanding the atmospheric concentrations of 210Pb and major ions in aerosols in Qingdao, China, including their seasonal variations and relationships with weather data and to identify the sources of atmospheric sulfur as a part of the Japan-China joint project, “Aeolian Dust Experiment on Climate Impact (ADEC)”. The sampling period was from beginning of May 2001 to beginning of March 2002; and a high air-volume sampler was used with a polyflon filter. Atmospheric concentrations of 210Pb ranged from 0.15±0.03 to 6.63±0.26 mBq m-3 with the mean (±S.D) of 0.93±0.21 mBq m-3 and they showed a clearly seasonal variation with high values in winter to spring and low values in summer to autumn, the lowest values were observed during the rainiest period. Total suspended particles (TSP) ranged from 27.17 to 289.43 μg m-3 with an average of 123.99 μg m-3 which exceeded the World Health Organization (WHO) guideline level for maximum annual exposure of 10 and 20 μg m-3 for PM2.5 and PM10 respectively. The concentrations of Cl–, NO3–, SO42- and NH4+ were high in winter and low in autumn. Mg2+ and Ca2+ concentrations did not show any seasonal variation. Ca2+ shown a strong correlation with TSP (r = 0.81, p<0.01) this revealed that soil particles were mainly the source of TSP. The strong correlation found (r = 0.76, p<0.01) between SO42- and 210Pb shown that they were originated mostly from anthropogenic activities the same conclusion was deducted based on the δ34S sulfate measurement results.

In the present work, a set of indoor radon levels were measured in 45 dwellings in 15 selected cities of Egypt. Radon concentrations were determined using time-integrated radon dosimeters (closed and bare) containing LR-115 solid state nuclear track detectors. Measurements were carried out for one year to obtain an unbiased estimate of the annual average. The main objective of this study was to assess the health hazard due to the indoor radon. The results showed that the radon activity concentration varied from 20.6 to 42.1 Bq m-3, with an average value of 30.9±7.3 Bq m-3. These measured values are less than the recommended maximum value of 300 Bq m-3 for radiation protection of residents according to ICRP Publ. 126. Values of the indoor radon equilibrium factor F varied from 0.30 to 0.44, with an average value of 0.39 ± 0.03, which is almost equal to the value (0.40) proposed by UNSCEAR 2000 report. Calculated values of the indoor annual effective dose to residents in dwellings varied from 0.51 to 0.99 mSv, with an average value 0.75 ± 0.16 mSv. These values are lower the normal background level of 1.1 mSv y-1 quoted by UNSCEAR 2000 report and the recommended action level of 10 mSv y-1 as reported by ICRP Publ. 126. Thus, the present results have shown that radon concentration levels in the studied dwellings do not pose any significant health risk to occupants.

The study investigates the influence of meteorological factors on the count of 222Rn and 220Rn gases at the interest of observing them as a possible forecasting gas to geophysical phenomena. The study was carried out between May, 2018 and October, 2018 at the soil-air interface using a ZnS (Ag) scintillator counter (Model: SMARTRnDuo, BARC, India). Data’s were generated insitu online and was the first of its kind for the region. The backward multiple linear regression analysis shows that pressure was the most effecting variable on radon data, while no significant correlation was observed between thoron and meteorological data. The observed weak correlation between the isotope pair data and most of the meteorological factors reveals activeness of action taken against the factors, while acquiring data. Concentrations and fluxes of the isotope pair, content of 238U and 232Th and their comparison with the worldwide average were also presented. It is also observed that radon data of the continuous monitoring station (CMS) and Mat fault varies in proportion during geophysical process, while no geophysical properties of 220Rn were observed. The study reveals the reason behind radon anomaly was geophysical activity but not meteorological factors.

Radiation Safety and Public Health for Radiological Professionals: Meeting Report on The 5th Educational Symposium on Radiation and Health (ESRAH) by Young Scientists in 2018

The nuclear power plant accident on March 11 2011 in Fukushima prefecture in Japan greatly increased the interest in the effect of radioactivity and low-dose exposures on the environment and human beings. Our symposium “Educational Symposium on RADIATION AND HEALTH (ESRAH) by young scientists” has shifted more to providing information on radiation protection and inviting international researchers rather than basic radiation research. Since 2014, this symposium has provided an international forum for information exchange and discussions on a wide range of subjects related to radiation effects on the environment and the human body, radiation protection, radiation detection and emergency medical care. The 5th Symposium was held in Hokkaido University in 2018 under the theme of “Radiation Safety and Public Health for Radiological Professionals”. In this article, we summarize and review of the ESRAH2018.